As a young child, an optometrist prescribed glasses for you and as soon as you put them on, you realized that you could see better without them.  Everyone, including the optometrist, insisted that you didn’t know what you were talking about.  Glasses help you to see BETTER, after all.  Everyone insisted you continue wearing the glasses so you began doubting your own senses. 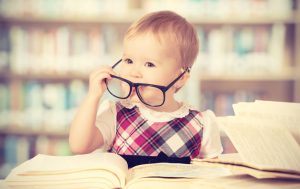 So you kept the glasses on and just accepted that you are slow.

When you tried to play sports, you failed, because you couldn’t see the ball.  You were labeled uncoordinated, slow, weak, clumsy and inept. You stopped attempting to play sports.

As a teenager, you began removing the glasses in secrecy.  And you realized that you could actually see and READ without the glasses.  But whenever you were caught not wearing your glasses, you were punished. So you kept the glasses on in public.

Every time you went to the optometrist, you were given a stronger prescription, which made your vision even worse, so that when you wore the glasses, you were mostly blind, bumping into walls. You were not allowed to go anywhere by yourself because of the inherent danger of not being able to see.

When you turned 18, you rebelliously removed your glasses and refused to wear them.  Everyone, including your optometrist, shamed you for your insolence.  The public authorities were called in an attempt to save you from yourself.  But by this time, you were an adult, and you were free to ruin your own life and health as you saw fit.

But it turns out, everyone was wrong.  You had been misdiagnosed all along.

No one was sorry, because, after all, the optometrist was only looking out for your best interests.

And look how well you turned out!

Never mind that you were robbed of a childhood.

And the optometrist’s office still continues you call and remind you that you have appointments.  And they expect you to never question their authority again.

IMAGINE that the optometrist is a Borderline Mother.