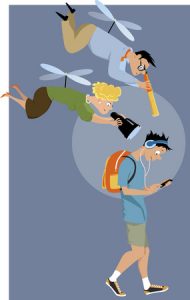 Helicopter Parenting is a term coined in recent generations that describes a parenting style where the parent is overly-involved in their children’s lives. It surprises me that the parents who subscribe to this method are always proud of it, much the way that people proudly announce being “Type A” or OCD.  Go to any PTA meeting or children’s sporting event and you will hear the unprovoked proclamation, “I’m a Helicopter Mom!” met with nods of approval.

The reality is that Helicopter Parenting is a form of child abuse. For the purposes of this article, I will use the feminine gender, simply because more women claim to be Helicopter Parents, than men do. But it does occur with both genders.

I was raised by a Helicopter Mom, long before the term evolved. My mother feared EVERYTHING, most of all abandonment. The way she assuaged these fears was to become a control freak. As far back as I can remember, I felt like I needed to escape. As a young child, I can remember people telling my mother that she was over-protective, which she took as a compliment. When it was time for me to enter Kindergarten, my mother held me back, because SHE wasn’t ready. Her helicopter parenting carried over into my teenage years, where my mother continued to control every facet of my life, including what activities I participated in, what musical instruments I would play, who I could be friends with, what food I could eat and how much, what television shows I could watch and what clothes I could wear. She insisted on dressing me in much younger styles than my contemporaries. At age 14 I was forced to wear Winnie the Pooh embellished clothing. She was the Room Mother for my classrooms, every year, the chaperone for every field trip, the Team Mom for my sports teams, and the Leader of my Girl Scout troop. Any chance for independence was squashed by her overbearing presence.

Her Helicopter Parenting wasn’t limited to superficial issues, either. Mom demanded a report on my bowel movements. If I ever answered “I don’t know,” she would assume I was constipated and enforce a remedy. Not even my intestines were afforded privacy from Mom. She also felt entitled to control and ownership of my mind. She was extremely religious and forced me and my siblings to listen to her preach her form of the gospel for hours on end. She would buy diaries and encourage us to write down our most intimate thoughts and then she would read them and chastise us if she disapproved.

As I began aging out (and my sentence was coming to closure), Mom’s abandonment fears kicked into hyper-drive and she would do crazy things like follow me around in her car, show up to my friends’ houses unannounced, and sniff my bed sheets. Some of my friends’ parents refused to allow them to hang out with me because my mom had “issues”. As soon as I became old enough to work, I got a job within walking distance to the house and would use the money to buy my own clothes. Those clothes would mysteriously go missing or would end up being washed in hot water with something red.

Transversely, despite all of Mom’s Helicopter Parenting, she never laid out any plans for my life beyond her. There was never any college fund or career path discussed. She couldn’t comprehend a future of mine that didn’t involve her control of it. Every forced stepped towards adulthood was treated as an act of rebellion. It was clear that she was never going to be ready for me to leave.

At age 18, I left home and ran off to live with my boyfriend. The path I chose for myself was very bumpy, but it was better than being held a prisoner by my Helicopter Mom, whose goal, it seemed was to keep me at home dressed in Winnie the Pooh for eternity.

So whenever I hear a mother stand up and proudly proclaim to be a Helicopter Mom, it triggers a type of PTSD for me. They would be more accurate if they proclaimed, “I have a Personality Disorder and I plan on disabling my children so they can never abandon me.”

If you happen to be a proud Helicopter Mom, then please stop.  Prepare your children (and yourself) for adulthood, instead.

Pam McCoy is a writer, author and co-host of Crazybusters