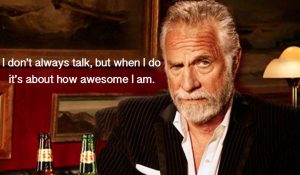 It was a really strange interview. Dick (not his real name) sat across from me behind his desk, frequently spinning around 360 degrees, pausing dramatically to look at his wrist watch. For the duration of my 45 minute “interview” Dick talked about himself. HIS rise up the corporate ladder, HIS family, HIS car(s), HIS numerous divorces and corresponding children, where HIS children were scattered, as well as their many short-comings, where HE lived and the size AND COST of his home (along with countless other faux pas that I have since blocked from memory). When he was finished, he asked me when I could start. Clearly the most important skill, according to Dick, was my ability to listen.

I took the position, despite Dick’s glaring personality disorder, because, like so many other people, I had bills to pay. I believed that if I did my job well, Dick would leave me alone and I could learn to ignore his histrionics.

But just like Glenn Close’s character in Fatal Attraction, DICK WOULD NOT BE IGNORED!!!!!!

Over the next few years, Dick would schedule many staff meetings, where he would hold the office personnel captive and force us to endure the play-by-play recaps of his online gaming from the night before. He also regaled us with bloviated tales of the days when he was a:

The accuracy of Dick’s tales was never disproven. However, it struck me that Dick had a lot of stuff going on simultaneously, and none of it relevant to his climb to the lower rungs of the corporate ladder in his (then) current role. Dick’s stories were full of holes and he often contradicted himself. Dick tried way too hard to convince the rest of us that he was a modern day Superhero. In reality, we all thought he was The Most Boring Man in the World.

During a company Christmas function where spouses were invited, Dick pulled my husband aside and told him that I was “pretty but not very bright.” It’s difficult to interpret Dick’s strategy here, but needless to say, my husband was not at all impressed with Dick.

Towards the end of Dick’s reign of boredom, one of the Vice Presidents had come to our satellite office. It was Dick’s day to hob nob with one of the Big Bosses. Dick was nauseous in anticipation. When the pair returned from lunch, the Vice President was pale and shaken. He walked in the office, went straight to an empty office and shut the door.

It turns out that, while Dick was driving back from lunch, with the Vice President in his passenger seat, he got into an altercation with another driver, which escalated into road rage, where Dick side swiped the other car from the passenger side. The Vice President immediately called Human Resources and told them that Dick was “Crazy.”

One week later, I showed up to work and Dick was standing outside his office and asked me to come in and take a seat. I followed, expecting to be fired. You know, for not being very bright.

Dick told me that he had been laid off, that he was faced with the decision to cut all the rest of the staff, or for him to leave (presumably so he could do all of our jobs?), and that he decided to “fall on the sword” so that I and everyone else in the office could keep our jobs. It was hard not to laugh at that point.

He brought everyone into his office separately and told slight variations on the story.

Of course Dick’s firing had NOTHING to do with endangering the life of another man.

I tell you the story of Dick because Dick is the poster child for NPD (Narcissistic Personality Disorder). Dick doesn’t realize that people can see behind his mask. Dick has no self esteem and no sense of Self. Dick relates only to the False Self version that he created and hides behind. Dick bullies others because he believes that if people are afraid of him, he is powerful. Whenever Dick is not dominating, criticizing or marginalizing other people, he feels impotent and emasculated. He feels threatened by every person around him and believes that all relationships are a battle for dominance.

Dick doesn’t realize how boring and obnoxious he is because Dick lacks empathy. He doesn’t CARE enough about other people to contemplate how his treatment makes them feel. Dick cannot comprehend that he is not the center of every person’s universe. He doesn’t get why people don’t like him.

Unfortunately Dick is not alone or unique. In fact he is in crowded company. It is estimated that about 1% of the population “suffers” from NPD. If there was a contest for The Most Boring Man, Dick would definitely rank highly. But the competition would be pretty stiff.