Most articles about relationships with narcissists center around the narcissist and codependent archetypes.  But have you ever wondered if narcissists are truly compatible with anyone else? 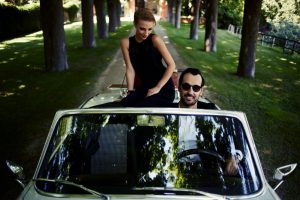 While “compatibility” is subjective, there are several possible relationship scenarios between a narcissist and anyone else, that work for all parties involved (save, except for any unfortunate children who are born to them).  The one I will discuss in this article is the symbiotic and transactional relationship between a somatic narcissist and the gold digger narcissist.

“Gold Digger” is a derogatory colloquialism describing a woman who deploys her sexual wares to ensnare herself a financially affluent husband.

A “somatic” narcissist is a descriptor typical of the narcissist who is prone to being flashy and boastful.  It’s most important to the somatic narcissist that his physical possessions, his prowess and his appearance, be acknowledged, glorified and envied.  The somatic narcissist is the person driving the flashy car, sporting the Rolex and, as described further in this article, wearing the most attractive woman he can afford, on his arm.

The “Gold Digger” is the female version of a somatic narcissist, whose goal it is to snare herself, by any means necessary, a wealthy somatic narcissist who will support her in the means she believes she is entitled.

The somatic narcissist and the gold digger have an unspoken understanding that theirs is a contractual relationship where both of their needs are being met, and since they are both narcissistic, neither of them expects emotional intimacy.  Together they fill each other’s desires to be appear superior to everyone around them. They are the ultimate power couple.

This couple is also likely to have a “don’t ask, don’t tell” attitude towards infidelity.  As both understand the insatiable need for variety in narcissistic supply, affairs are common, especially considering neither is capable of loyalty.

“But where is the love?”  you ask.  “Don’t narcissists want to be loved?”  And, “Don’t they feel sleazy knowing that their partner only wants them for their physical and financial value? Doesn’t the narcissist want to be loved for who they are and not for what they have?”

The answer to all of these questions is no.  They want to be admired, envied and feared. But they absolutely do not care about being loved. At least not in the sense that non-disordered people define love.  Narcissists are incapable of true intimacy and they view things like love, generosity, sympathy, empathy and charity, as a weakness to be exploited.  Narcissists only respect other exploitative narcissists and sociopaths like themselves.

The only snare in the arrangement between the somatic narcissist and gold digger, comes into play whenever one or both of them fails to hold up their end of inflating the other person’s ego.  Or when one of the outside sources of narcissistic supply becomes more lucrative.  For instance, if the gold digger gains weight or allows her physical appearance to diminish, she will be discarded and exchanged for a younger source.  Or if the somatic narcissistic squanders his wealth, he will be of no use to the gold digger. Since both are completely self-centered, there will always be a competition for whose needs trump whose.  The contractual relationship will quickly come to an end when a better contract becomes available.