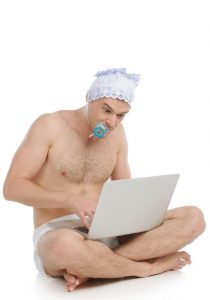 Since beginning Shrink4Men in 2009, I’ve frequently referred to narcissists, borderlines, psychopaths, histrionics and sociopaths as children in adult bodies or emotional toddlers. That’s because they frequently think and act much younger than their physical age. In other words, they exhibit a persistent and chronic lifelong pattern of emotional and psychological immaturity.

Sure, they might have friendships that go back 10 years or more, but consider the nature of the friendships. Typically, “friends” of narcissists and other emotional toddlers are comprised of:

These friends aren’t friends, they’re useful tools. And that’s what you are to your narcissist or psychopath — a useful tool. Until you’re not. Then you’ll be devalued, discarded and replaced.

If you’re the adult child of a narcissist or borderline, you were probably parentified as a child. You grow up fast when you have a personality disordered parent. You have to — mommy or daddy needs you to take care of them. In which case, you probably developed some codependent caretaker traits and have chosen adult partners who are just as emotionally and psychologically underdeveloped as your parent(s).

In other words, your model for adult relationships was anything but adult. You were conditioned to believe that love is doing and doing for others and sacrifice and pain. Unlike actual children with good enough parents, narcissists and psychopaths don’t grow up. She or he isn’t going to have an epiphany and change their ways. They’ll continue to take and take and take until you’ve nothing left to take. They’ll exploit and abuse you until they break you and then become angry with you and blame you for being broken. Just like a toddler who breaks a toy by playing roughly with it.

If you’re married to, dating or have a parent who is a narcissist, there are probably many occasions when it feels like you’re dealing with a 3-year old in a 53-year old’s body. Odds are that’s exactly what was happening. Ever try to reason with a 3-year old? A 12-year old? Good luck with that.

The reason it feels like you’re dealing with a toddler if your spouse, boyfriend or girlfriend, parent, sibling, etc., has narcissistic, borderline, histrionic or psychopathic traits is because these personalities are frozen in a state of arrested emotional, psychological and moral development. Here are some traits that narcissists et al have in common with actual toddlers:

If you’re presently determined to stay with your narcissist or borderline, for whatever reason, stop rewarding her or his tantrums. Ignore them. Leave the house. Hang up the phone. Heck, turn off your phone. Expect that he or she will escalate. Continue to ignore them. Unless she threatens to make a false 911 call or he or she becomes violent, then please, please, please get the hell away from them as fast as you can.

Unreasonable and incessant need for attention. Being in a relationship with a narcissist, borderline or psychopath eventually feels like breast feeding an angry baby crocodile with a tapeworm. They never seem to tire of feeding. Their appetite for attention is insatiable.

I lived with a narcissist for nearly 7 years. The empathy well ran dry at around year 4. I should’ve realized the end was nigh when he made one of his emotional distress signals (a heavy sigh accompanied by brow furrowing and holding his forehead in his hands as if in mortal agony) and I inwardly rolled my eyes. By that time, I’d ceased to jump in response to his nonstop attention-seeking. His laundry needed washing and his meals needed cooking, too, not to mention the work I’m actually paid to do. There are only 24 hours in a day after all.

After I didn’t immediately stop what I was doing to inquire what or who was vexing him in that particular instant, he followed up the nonverbal distress signals with, “I’m feeling really anxious.” Translation: “Stop what you’re doing, assume the position and listen to me.” My internal editor must’ve been on a coffee break because I reflexively asked, “What is it now?” Whoopsy and KABOOM!

I had nothing left to give. He’d consumed it all. I later discovered he was already actively grooming my replacement when that occurred. It’s the narcissist’s equivalent of double-dipping their chips. It’s not attention seeking, it’s attention gluttony. It calls to mind Templeton the Rat gorging himself at the fair in Charlotte’s Web.

Poorly developed problem-solving skills. If you’ve been in a relationship with a narcissist, borderline or psychopath, you probably describe yourself as afraid of conflict. Maybe you are, maybe you’re not. It’s more likely that you avoid conflict because of how your NPD/BPD does conflict. This emotional toddler creates conflict not to resolve issues, but to distract from the real issues — his or her personality and destructive behaviors.

They’re not interested in determining and doing what’s right. They just want to be right, especially when it’s blindingly obvious that they’re wrong. That’s the sweet spot right there. If she or he can get you to apologize for whatever shitty thing they did to you it’s a narcgasm. They bully, bulldoze, talk over, pout, threaten, kitchen sink, derail the conversation, bring up old conflicts. Whatever it takes.

They’re not interested in compromise or finding win-win solutions. The only win for this kind of person is if she or he gets what they want and for you to absorb the cost be it monetary, emotional or physical. They have to have all the cookies, a much bigger cookie or, at the very least, 3 more chocolate chips than you. Your suffering is what makes her or him happy, but not for very long. They want what they want whenever and where ever they want it and you’d better deliver, dammit. The volcano god/goddess requires regular sacrifices.

Need based love. A child’s love for her or his parents is born of need. Infants can’t take care of themselves and rely on their parents utterly. Children and children in adult bodies don’t have the capacity for mature love based on mutuality and reciprocity. Your narcissist doesn’t love you. Your narcissist loves you for what you can do for her or him. You’re a source of supply — attention, social status, ass kissing, physical labor, money, etc. You’re the most amazing person ever when your narcissist is getting everything he or she wants and you shield them from life’s everyday frustrations.

Narcissists, borderlines and psychopaths need their targets and enablers. They don’t love them. Periodically, when they’re not in a state of need, they expect you to leave them alone. Or, rather look at them adoringly and observe them ignoring you just like children want mom and dad to watch them do handstands in the swimming pool. They don’t want the parent to participate in their play. They want the parent to be their audience. 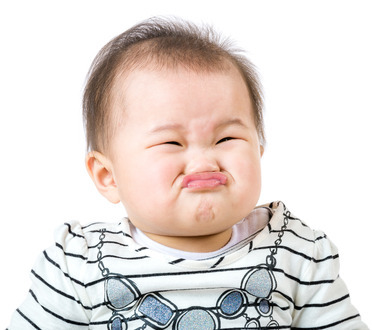 Poopy Diaper Face. It’s the look of emotional constipation the narcissist, borderline or psychopath gets just before she or he gets their tantrum on. Sometimes it’s more subtle like a slow simmering pout. Sometimes it’s more scary and potentially dangerous like when they turn on the Death Stare™ or the Shark Eyes™.

In other words, it’s the non-verbal signal that your emotional toddler is building up to one of his or her episodes. Why do they do this? Much like actual infants and toddlers, most narcissists, borderlines and psychopaths don’t have the ability to self-soothe, amuse themselves, reality test and problem solve. When feeling any kind of emotional or physical discomfort their reflexive behavior is to alert the nearby grown-ups to come and tend to them.

Or, if they can’t get your attention fast enough they’ll then self-soothe through self-destructive and destructive to others behaviors. Alcohol and drug abuse, overeating, overspending, cheating, raging at you to provoke an angry response, lying (creates the feeling of duper’s delight) — you know the drill.

Caring for oneself is the duty of every adult. It’s a duty to ourselves and others. When children are small and helpless, it’s a parent’s job to protect and care for them. It’s also a parent’s job to teach children how to assume increasing personal responsibility and self-care as it becomes developmentally appropriate.

Do you really want to spend the rest of your life tending to an emotional toddler who refuses to grow up? Do you want to be a parent or a partner? If you want a relationship of equals it’s time to launch your emotional toddler. It’s highly unlikely she or he will grow up. They’ll just find their next enabler, but you’ll be well rid of them. Then you can start taking care of you.