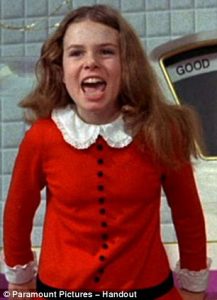 I want to lock it all up in my pocket.

It’s my bar of chocolate. Give it to me now.”

Veruca Salt, from Willy Wonka and the Chocolate Factory, 1971

Narcissists are the product of childhood abuse. These abuses take on many forms. One of the most insidious but nonetheless damaging is over-indulgence. Like the Veruca Salt character in Willy Wonka and the Chocolate Factory, Narcissists are groomed from an early age. In this case, Salt’s damage wasn’t due to overt abuse or neglect. Salt was being groomed to become a Narcissist by being given everything she wanted – not as a reward for good behavior, but as bribery for not throwing tantrums. Veruca Salt was a spoiled brat.

Healthy parents realize that what their children want and what they need are often juxtaposed. For instance, your child may want to eat cotton candy for breakfast, lunch and dinner. But what she needs is healthy food so that she gets the nutrition her body needs and to prevent her teeth from rotting out.  Healthy parents love their children enough to tell them “no”.

Over-indulgent parents parent their children out of fear, laziness and ego.  They fear that if they enforce boundaries, their child won’t like them, or they fear the ensuing tantrum.

The over-indulgent parent is too lazy to use the consistency and tenacity required to enforce boundaries. For instance, the over-indulgent parent may not care enough to potty train their child, sending them to bed in Depends well past toddler years, instead of helping them by forcing the child to use the toilet or limiting beverages prior to bedtime.  As the child gets older, the over-indulgent parent will buy their child toys, electronics and vehicles that the child is too immature to care for, setting them up for failure, and creating a sense of entitlement, whereby the child grows up believing she is owed things, rather than having to earn them, and feeling no obligation or responsibility for the things she has.

It’s likely that the over-indulgent parent is also a Narcissist, who views their little darling as an extension of his/herself, and raises them to be a Prince(ss).  And the Narcissism is handed down from generation to generation.