So you finally made the terrifying and gut-wrenching decision to escape your Cluster B Personality Disordered (CB) spouse. Good for you! 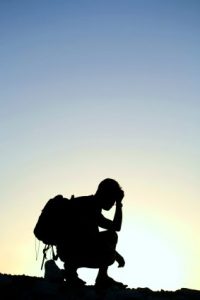 But now the CB is operating in vengeance mode. S/he is manipulating your shared children, poisoning them against you, bribing them with goodies, withholding visitation/child support, and generally continuing to be the same asshole you escaped. What now?

In an ideal world, divorced parents would put aside their differences and co-parent effectively to insulate their shared children from the emotional debris. But given that you were not able to co-parent effectively under the same roof together, the CB isn’t going to stop being a jerk post-divorce, either. In fact, s/he is going to ramp up the asshole activities. CB’s play to “win” and everyone around them suffers collateral damage, including their own children.

So now you are having second thoughts about your decision to escape. You are wondering if you made a mistake. Perhaps if you had stayed in Hell with the CB, you could have protected your children. Maybe if you could have given more blood to the vampire s/he would have become a human.

Not a chance. Your escape had to happen or you would have died (figuratively or literally). The CB doesn’t stop her/his pursuit of prey until the prey is dead. Then you would have been discarded and left in an even worse state than now. The analogy of placing the oxygen mask on your own face first, applies in this situation. In order to be a life raft for your children, you had to escape. The only way you can provide a safe place for your children to land, is to get away from the CB. You had to get yourself healthy and that would have been impossible while still living with the CB. Staying with the CB and taking the abuse was damaging your children as much as it was you. By staying with the CB, you were teaching your children that taking abuse is okay, or that being abusive is okay.

The way that you and your children learn to survive and thrive and hopefully counteract the Parental Alienation from working, is for you to learn how to enforce boundaries. This is the opposite of Taking the High Road. And it is also the opposite of rolling around in the mud  (aka Taking the Low Road). Setting boundaries for yourself is not only your right – it is your obligation. Lack of boundary setting is likely what made you vulnerable to a CB in the first place. If you are codependent, setting boundaries can seem like learning to speak Latin.

Here is why you can’t take the High Road. If you are a White Knight personality type, you might believe that you are falling on the sword by engaging and negotiating with the CB. And in reality, you are. You are committing suicide. What your children need, more than ever, is for you to demonstrate firm boundaries – not to demonstrate how to walk on eggshells.  Your children will benefit from knowing that you are siding with them and not their emotionally abusive parent.

This is opposite the advice most people will give you. And so many people are overly-generous with their ‘advice’. Most people can’t comprehend how mean and nasty disordered people can be towards their own children. CB’s are different than normal, sane people. They have no moral compass. They cheat. They lie. They manipulate. They make promises they have no intent on keeping. They shoot the hostages, every time. If they were decent people you could remain civil but they’re not so you can’t.

While you will be forced to deal with the CB on some level, if you have children together, there is no rule or law forcing you to engage in his/her version of co-parenting. The beauty of no longer being married to the CB is that you now have guidelines that not only you are forced to follow, but that s/he is forced to follow as well.

Shore up your Custody Orders

The custody order that you agree to in divorce court will be your best friend or enemy, depending on how vague or precise it is. If you agree to vague terms such as, “mutually agreed upon,” expect that every single kid exchange will be a hostage negotiation that you will lose. Insist that there be a specific date, place and time and then NEVER STRAY FROM IT. Whenever the CB wants (demands) that you waiver, just say no. This also means that you can never ask for changes to the custody order, as well.

Arrange to have the pick-up and drop off occur at a neutral place such as a restaurant parking lot. If the CBx has been violent or made threats to your safety in the past, do the exchanges at the Police Department parking lot. Even better, pick up and drop off your children at school or daycare, avoiding interactions with the CB altogether. If the CBx is violent and you cannot avoid interacting with them during drop off, bring along a witness. Most CB’s fear exposure and can keep their mask on in front of third parties for a short duration of time.

Keep a copy of your custody order on you at all times. WHEN the CB refuses to hand over your child(ren) at the designated place/time, do not hesitate to call the cops. Chances are that the CB will only get his/her hand slapped at first. But repeated infractions will result in fines and/or loss of custody.

Communicate in Writing Only

Whenever the CB speaks with you in person, s/he will always use the opportunity to cut you down, tell you what a disappointment you are, manipulate you and make you feel guilty. S/he deploys all of the FOG (Fear, Obligation, Guilt) techniques that s/he did when you were still married. The CB will lie and deny any verbal agreements ever took place, anyway. Besides, no communication is ever really about your children. Your children are merely pawns that s/he uses to interject him/herself into your life and control you from afar. Control equates to winning to the CB.

Contrary to what the CB would have you believe, there is no law or rule, anywhere, that can force you to communicate with the CB in person or on the phone. In a true emergency, s/he can leave a voice message. If there is no real issue, do not respond, not even to defend yourself against accusations (unless it is with an unemotional, “this is not true.”). There are several good online resources set up for the online co-parenting (i.e., Our Family Wizard), that can take away the CB’s feeling of intimacy by having indirect oversight by a third party.

Don’t rely on the disordered parent to relay information to you regarding your children. Form direct lines of communication between teachers, coaches, doctors, dentists, etc. If your custody order states that you have joint decision making, make sure that the agencies know. Send them a copy of your custody order if necessary.

Find a Good Therapist for You and Your Children

All therapists are not created equally. Take the time to interview them, and find a therapist who understands the futility of trying to co-parent with a disordered parent.