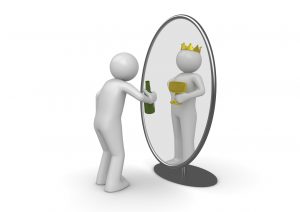 When I had confronted my narcissistic ex-husband about an affair I had uncovered, his response to me was, “That had nothing to do with you.” He couldn’t understand why I was so angry. Nevermind that he would have tried to kill me if I had done the same.

It was one of his rare honest moments. If there’s any truism about narcissists, it’s that none of their actions has anything to do with you.
Narcissists view the world through a myopic lens. Their need to inflate their own ego overrides any foresight into how their actions might affect the people closest to them. Despite all of the narcissist’s shameless self-promotion, chest-pounding and bragging, narcissists have not just low self esteem, but NO self esteem. As a maladaptive coping mechanism developed in childhood in response to abuse or neglect, the narcissist created a kind of second personality – one that is the opposite of the deflated and worthless True Self. As the narcissist ages, the True Self goes into an emotional coma and the False Self fully possesses his body. In fact, even at my lowest low, after taking years of abuse, my self esteem was still greater than that of the narcissist’s False Self. Every action the narcissist takes is about him/herself and the defense and fortification of the False Self that he has constructed to hide his True Self not only from the rest of the world, but from himself.

The problem with this False Self is that, subconsciously, the narcissist knows that the worthless True Self is still there. And he spends every waking moment terrified of being exposed for being a fraud. Exposing his True Self would result in annihilation of the False Self. To the narcissist, annihilation of the False Self would be a fate worse than death. To protect against exposure, the narcissist beats down the self esteem of those people he views as valuable to his ego, as a means to control them. Much the way that a spider injects a paralyzing serum into flies caught in his web, so that he can ingest them at his leisure. Because the narcissist, as he operates in the world around him, is not a real person, he is not capable of intimacy and he lacks empathy. He literally cannot put himself into other people’s shoes. The spider feels no empathy for the fly. And it really is nothing personal – to the spider, the fly is merely food.

There were many times when I would try to rationalize with the narcissist and ask him, “How would you feel if I did the same thing?” And I would be met with rage and blame shifting. Never an ounce of empathy or understanding. It was as if he couldn’t understand why his shoes were complaining about being on his feet. The narcissist views all people as sources of supply or tools used as a means to an end. If you have no value to the narcissist, you will be dumped and replaced with a new source.

And again, this will never have anything to do with you. Because you were never real to the narcissist in the first place.

I visibly cringe every time I see or hear the term, “suffers from a Personality Disorder.” While it does seem as if those Cluster B disordered folk appear to have a lot of anger and insecurities, their “suffering” pales in comparison to the suffering they inflict on others. I think the term would be more accurately stated as, “is an incurable selfish jerk.” 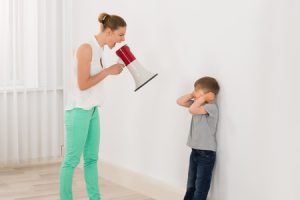 Changes to:  Janice’s children suffer immensely because Janice is an incurable selfish jerk who bullies, controls and intentionally stunts them so they will be incapable of living without her. 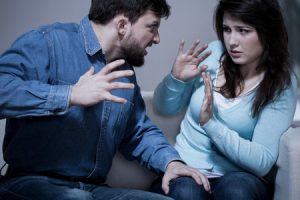 Changes to:  Carl has beaten his wife down so badly that she contemplates suicide daily because Carl is an incurable selfish jerk who derives sadistic enjoyment out of being mean.

It seems to me as if those folk who are classified as having Cluster B Personality Disorders don’t really suffer that much at all. Instead, they developed coping mechanisms to rid themselves of human qualities such as Empathy, Sympathy, Compassion, Integrity and Remorse. Basically, their coping mechanisms rid them of normal human “suffering”, except when their abhorrent behaviors eventually result in a natural consequence (jail, divorce, etc.) for THEM.

I think it’s time we call them what  they are:  Jerks 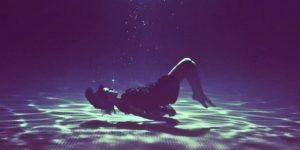 If you’ve ever been in a relationship (familial, intimate, friendship or work) with a Cluster B Personality Disordered person, you’ve experienced the receiving end of their Silent Treatment.

Many victims of disordered people claim that the Silent Treatment is even worse than their raging / nagging / complaining counter-persona. I personally disagree. I will take the sulking, door slamming, silent pouter over the raging maniac punching holes in the walls, any day. But that’s just me.

So how, you ask, does one deal with the Silent Treatment? The simplified answer is that you don’t. Any person who intentionally seeks to cause you emotional harm, does not deserve your company. Mature adults use communication to work through their differences and don’t resort to passive aggressive manipulations to get their way. Normal/sane people don’t intentionally cause harm to their loved ones.

Normal/sane people don’t intentionally cause harm to their loved ones.

If you are in a relationship with an immature jerk who abuses you with the Silent Treatment, you need to get out of this relationship, stat.

While this immature jerk is enjoying the pain s/he believes s/he is causing you with the Silent Treatment, use the temporary state of peace to devise your exit plan strategy. If your abuser is a spouse, use this time to meet with an attorney, to collect your important documents and valuables, and to get your affairs in order. If your abuser is an employer, dust off your resume and begin looking for another job or an opportunity to transfer somewhere within the same company. Friends and family with whom you have no financial ties are easy – make their Silent Treatment permanent by going No Contact. 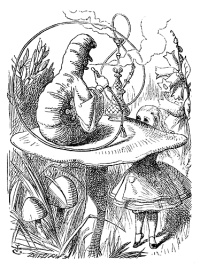 ‘Who are you?’ said the Caterpillar.

This was not an encouraging opening for a conversation. Alice replied, rather shyly, ‘I — I hardly know, sir, just at present — at least I know who I WAS when I got up this morning, but I think I must have been changed several times since then.’

‘What do you mean by that?’ said the Caterpillar sternly. ‘Explain yourself!’

‘I can’t explain myself, I’m afraid, sir’ said Alice, ‘because I’m not myself, you see.’

Advice from a Caterpillar | Alice’s Adventures in Wonderland, by Lewis Carroll

Living with a Narcissist is chaotic.

The reason it seems hard to focus is because, in response to continuous abuse from the Narcissist, you turned inward. You shut off your emotions to numb the pain. You might have even self-medicated or prescription medicated. You willed yourself to stop focusing on the pain but that also means that you stopped focusing on other things, too (like happiness, for instance). This is the Fawn Response in the Fight/Flight/Freeze/Fawn Trauma Response Spectrum.

While you shut off your emotions, you couldn’t afford to not stay focused on what the Narcissist is doing, because you never know when or what is going to trip the Narcissist’s fuse. You must always be on high alert. Thus, the “chaos”. When you live with a Narcissist there is never any energy that can be focused on yourself because the Narcissist consumes it all.

If this scenario “feels” familiar to you, it’s because, as a Codependent, you are re-living your childhood through your adult relationships. A child who was punished for disagreeing, “talking back” or defending themselves, learned that the Fight Response was ineffective. The Flight Response didn’t work either because being captured after running away resulted in more severe punishment, and as a toddler you had nowhere to run to and no way to support yourself. The Freeze Response might have worked in some occasions but more often it resulted in you becaming an immobile target. Most Codependents develop the Fawn Response, where they become servile and beneficial to the Narcissist in hopes that by having value to the Narcissist, the will be less cruel.

Of course the Narcissist is not less cruel. Fawning only serves to draw you to more Narcissists. The same chaos from your childhood persists. And it is this chaos that keeps you feeling crazy and unable to focus. Long periods of chaos result in PTSD.

And as it is the same with any form or cause of PTSD, the disorder doesn’t come to an end just because the traumatic event ended. Often, the Codependent, despite being discarded by or escaping from the Narcissist, feels exactly the same sense of chaos when they are alone as they did while actively walking on eggshells. The Codependent has such messed up wiring that they are unable to turn their emotions back on, or to focus on themselves long enough to recover. So the Codependent returns to the Narcissist because living in fear felt better than living in an emotional void.

Even the Codependent who manages to end a relationship with a Narcissist, is not out of the clear unless s/he commits to healing and emotional growth. Unless the Codependent learns to value themselves, practice self care, and to FEEL their own emotions without fear, the Codependent will be drawn to the chaotic buzz that the Narcissist provides.