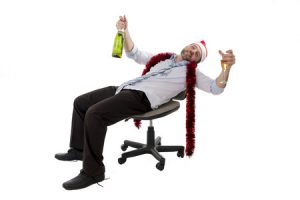 It always surprises me when I read in forums how people are having a difficult time maintaining No Contact with their former narcissistic partners over the holidays. From what I remember, the holidays were an especially miserable time to be living with a narcissist.

So to celebrate a narcissist-free holiday season (besides actually celebrating), I decided to write a list of all the things I definitely don’t and won’t miss about spending the holidays with a narcissist.

Happy Narcissist-free Holiday Season to those of you who have escaped the narcissist.

And for those of you who are still living the nightmare, I hope that 2018 is the year you decide to start living your life again.

I am your future self. I am writing you this letter because I remember how we were hoping to find a fast forward 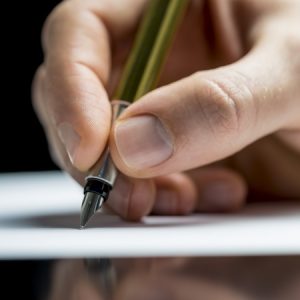 button or some leap of quantum physics to find out how you would ever get us out of that mess of a marriage. And since I am here (or should I say, we?) in your future, I can tell you that magic is a real thing, so I am sure you found that fast forward button and are reading this letter.

I have awesome news for you. We made it out and now our life is amazing. You should hurry up and get here. Stop wallowing in fear and anguish and self doubt. Life is short and precious and you were not intended to be spending it being abused by a bratty man child who is insecure and, as I later came to realize, is intimidated by you. AND THAT IS WHY HE ABUSES YOU.

All of that terrorizing and fear mongering is projection. He knows that you can do better than him so he fervently rips away at your self esteem so you won’t notice and so you are too afraid to move beyond him.

GET OUT OF THAT HOUSE NOW! Speed up your plans. I promise you, getting out is the hard part. But once you are headed for freedom, there will be no turning back. Stop laboring over the things you are leaving behind. Things can be replaced. Years of your life cannot.

Will you struggle after you get out? Of course I did. My head was all kinds of fucked up from living with a narcissist for all those years. That’s why I am telling you to get out. The longer you stay, the more of your soul – OUR SOUL – gets sucked out.

I have to give you kudos. Broadcasting your exit plans was a stroke of genius. All of those people who were rooting for you to get out made it hard for me to go back, because I didn’t want to let them down or look like a fool. Abusers need victims who can keep a secret. Keep on not keeping it a secret.

Remember when you thought that you were okay with escaping even if it meant you might end up poor and struggling? Well, that doesn’t happen. And you know why? Because we are smarter than that. We have always been quite capable of caring for ourselves. You will figure it out. Stop worrying about money.

Oh, and remember how you swore you were never going to ever be in a relationship, ever, ever again? Because you don’t trust your own judgment? Well, I’m not going to blow the big surprise for you, but trust me when I say that you are not going to spend the rest of OUR life being loveless and lonely. Despite our best efforts, love will find us. And for the first time in our existence, we are not lonely. You are going to be so surprised!

Right now, you are going to have to trust me and take that leap of faith. If not for you, do it for us. I am the net. I will catch you. I promise.

Pam McCoy is an author, write and co-host of Crazybusters. 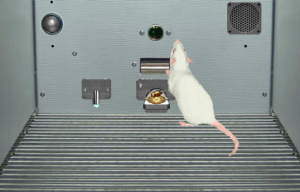 Studies performed by the National Domestic Violence Hotline found that a victim will leave his/her abuser an average of seven times before finally leaving permanently. There are many factors in this equation. But one of them is that the victim becomes addicted to the toxic relationship.

I’ve been on the support forums and read about how difficult it is for victims to maintain No Contact with their abusers, even after escaping.  I have also experienced this first hand. Logic would dictate that this should not be the case. But logically isn’t always how our brains function. Especially when you have been a long term relationship with a narcissist (or other Cluster B disordered person). Since the relationship’s inception you were groomed to believe what you are told, despite what you see (gaslighted). So you doubt your own senses and stop making decisions for yourself. You have also become addicted to the highs and lows of the relationship. This addiction can be attributed to Intermittent Reinforcement (IR). In fact, all forms of addiction can be attributed to IR.

Using lab rats, scientists put food pellets in a container that could be opened by the rat pushing a button. At first the rat was given as much and as frequently as it wanted. Then the pellets were emptied. The rat pushed and pushed and pushed at the button and after not receiving any additional pellets, after a time, moved on.

Then the scientists, instead of emptying the pellets, would give the rat a pellet after 3 or 4 or 20 attempts, so that the rat became frantic and obsessed with the pellets, never knowing when the next morsel would come out. The rat became so distraught that it stopped grooming and cleaning itself and its health began to decline.

Imagine this scenario in a slot machine. The gambler doesn’t know when the next “food pellet” is going to come out – he only knows that it will, eventually come out. So the gambler continues to put coin after coin after coin, to his own financial detriment, until he is completely broke or he, finally, gets another food pellet.

The same theory can be applied to the highs and lows of drug addictions, sex addictions, or any other addictive behaviors. We become that obsessed rat.

Disordered people inherently know how to manipulate and exploit people. While they lack empathy, they still need a viable host in order to survive, so they go into relationships with the cunning guile of a drug pusher. And the drug they are pushing is love.

Although it’s not real love, but rather, they are mimicking love because they know it is what will ensure their host will stick around and tend to their needs. In the beginning of the relationship, the narcissist lays on the “love” fast and heavy, putting their host on a pedestal and becoming everything their victim wanted in a partner (love bombing). After the narcissist has secured the victim and the victim has fallen in love, then the “food pellets” become increasingly sparse. Then the victim is shocked, wondering what they could have done to cause the narcissist to withdraw his/her affections. They become needy and begin walking on eggshells in hopes that the narcissist will one day return to the love bombing stage.

But that never happens. The narcissist now has the victim right where he wants her and will only occasionally throw a crumb to his victim to keep her alive. But by this time, like the obsessed rat, the victim has stopped all forms of self-care, has fallen into depression, and is less valuable to the narcissist. And this is when the narcissist will coldly discard you for a fresh new supply.

The key to overcoming narcissistic abuse is to go no contact and stop hoping for a crumb to be thrown your way. Meet with a trained therapist, reconnect with family and friends that you became isolated from, and learn to love yourself. This seems impossible to do when you have been emotionally ravaged from a narcissistic relationship. But learning to love yourself means that you are the generator of your own security, well being and self confidence, and that you won’t become prey to other narcissists. You will no longer be that obsessed rat.

Pam McCoy is a writer, author and co-host of Crazybusters

The story of Narcissus is from Greek Mythology. He was a hunter who was known for his beauty. He was the son of the river god Cephissus and the nymph Liriope. He felt disdain for those who loved him. Nemesis (the Goddess of Retribution) noticed this behavior and lured Narcissus to a pool, where he saw his own reflection in the water and fell in love with it, not realizing it was merely an image. Unable to leave the beauty of his reflection, Narcissus lost his will to live. 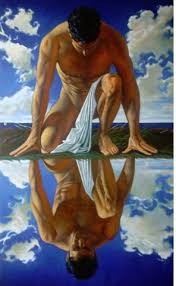 So it is obvious that narcissism is nothing new, as even ancient civilizations drew metaphors from it. Narcissus was born into privilege and entitlement, praised for his physical appearance (somatic). It is likely that under these circumstances, character and virtue held no value at all. In the fable, the image of Narcissus’s reflection in the water is what is now known as the narcissist’s “False Self”.

But where the fable falls short and is misinterpreted, is the claim and belief that it was Narcissus’s love for himself that ultimately destroyed him. It was not. Narcissists (including the original one) have no love for themselves. In fact, narcissists are so pretentious as to be exclusively obsessed with outward appearances, that they develop disdain for themselves, which they attempt to project onto those around them to ease their own suffering.

As their self loathing grows through absence of nurturing the true self, the image the narcissist projects to the outside world becomes increasingly false. Eventually the False Self takes over and the narcissist keeps his true self locked away in a chamber of his own creation, living in daily terror of its escape and his exposure.

The image that Narcissus fell in love with was the False Self, and it was his True Self who lost the will to live.

This is ultimately the fate of all narcissists. Annihilation of the true self is replaced with a ravenous void that can only be maintained by constantly stealing the self esteem of those who possess it.

Pam McCoy is an author, writer and co-host of Crazybusters